Below are the temperatures expected today at popular destinations in Fuerteventura. Select a destination to compare today's forecast with average weather conditions.

TUI: up to £250 off holidays to the Canaries 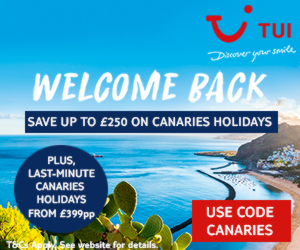 Which is the hottest month in Fuerteventura?

Does it ever rain in Fuerteventura?

It never rains much in Puerto del Rosario, Fuerteventura but February usually has the most rain with an average of 19mm. There are normally 3 days in February with some rain.

When is it sunniest in Fuerteventura?

The sunniest time of year in Puerto del Rosario, Fuerteventura is normally August with bright sunshine on average for 67% of daylight hours; that's 9 hours of sunshine per day.

When is the sea warmest in Fuerteventura?

The sea is usually at its warmest in Puerto del Rosario, Fuerteventura in September when the water temperature reaches 23°C.

Top 10 summer sun: Fuerteventura in May

Looking for some summer sunshine? We've handpicked 10 of the very best places to go for a sunny holiday in May, and the Canary Island of Fuerteventura is in ninth place thanks to its average nine hours of sunshine per day and warm daytime temperatures.

Compare Fuerteventura weather with the USA

Fuerteventura weather is renowned for being dry and bright with plenty of sunshine. While conditions remain quite stable all year round, there are some subtle variations in the temperature on land and in the sea, among other nuances, which make Fuerteventura weather quite unique.

Read on for full details of this island's weather and to find the best time to visit for you and your family, friends or loved one.

Fuerteventura is the second largest of the Canary Islands, after Tenerife, and is a huge hit all year round with holidaymakers. From its accessibility at no more than four and a half hours from the UK, to its marvellous warm and sunny weather from January to December, it makes for the perfect island getaway.

The weather in Fuerteventura plays a massive part in its lasting appeal with daytime temperatures only marginally shifting by 7°c between summer and winter.

Its characteristic semi-arid, desert-like, climate makes it the driest of the Canaries with hardly any rainfall, and naturally adds to the attraction.

It's also said that Fuerteventura has some of the best beaches in the Canary Islands, with more than 100 bays and coves to explore. While not all of these are safe for swimming, there are plenty of beaches with lifeguards, seven of which are proud Blue Flag winners.

Aside from the beautiful beaches, it's really the weather in Fuerteventura that plays a big part in making it ideal for families, couples and groups looking to enjoy everything this wonderful island has to offer.

Fuerteventura's summer - May to October

Although we're referring to the period between May and October as summer, this is largely because the division between winter and summer is hard to distinguish, squeezing out any real room for spring or autumn.

While there is a change in Fuerteventura's weather, it is quite a gentle one, easing into and out of the peak season.

May marks the start of summer with regards to the weather in Fuerteventura, as temperatures start to climb from 23°C to 24°C by June, and a solid 27°C by July. This heat then stays pretty consistent until October when it dips back towards 25°C.

From May onwards there's almost uninterrupted sunshine, which is specific to Fuerteventura where the lack of mountains means clouds don't tend to form above the island as frequently or easily as some of its neighbours such as Tenerife or Gran Canaria.

May and June are warm and pleasant with no heat and humidity, virtually no rainfall and just the high to extreme UV to watch out for.

The sea is still a little fresh to be swimming in at 19°C, so Fuerteventura's weather in May and, particularly the first half of June, is more about getting outdoors and making the most of the less crowded sights and landscapes - be sure to check when the half term holiday falls if you're hoping to avoid the masses.

The real height of summer is most definitely between July and September, when Fuerteventura weather enjoys up to nine hours of sunshine each day, no rainfall and warm evenings that sit between 19°C and 20°C.

Heat and humidity is only moderate in August, ensuring that your summer break here is hot without being too sticky. There is the ever-present extreme level of UV during these months, so a good SPF is definitely required.

The weather in Fuerteventura between July and September is truly delightful, and it's easy to see why it attracts so many holidaymakers at this time.

After a few months of warming up, the sea peaks at about 22°C, being warmest in September although this still isn't exactly hot.

In fact, the Atlantic is generally quite cool and prevents Fuerteventura's weather from becoming too oppressive, which is why even in summer, as in the Algarve, the sea feels refreshingly cool.

Another trait of the weather in Fuerteventura in summer is the wind, which is generally stronger during this time than in winter. While a little wind can help to alleviate heat and humidity at the hottest time of day, when it's blowing hard you'll want to seek out a sheltered spot on the beach.

The winds tend to blow from the northeast, although this does vary, and they're generally stronger than you'd find in Spain and the Balearics thanks to the island's position at the edge of the Atlantic, and the fact that it has no large mountains to deflect or control the breezes from the sea.

It can make certain stretches of open beach difficult for sunbathing, but heaven for water sport fans windsurfing or sailing.

Despite the fact that the winds come from the northeast, the eastern beaches are calmer and better for swimming as they're not exposed to the full force of swells from the Atlantic Ocean. The western beaches are where you'll find the surfer dudes.

Saying that, don't let the wind put you off visiting Fuerteventura, it's just good to be aware of it, especially if you're planning on lots of beachtime while you're there.

From the end of September onwards, summer starts to fade and things turn cooler although it remains very sunny with seven hours each day in October (compared to around three hours of sunshine in the UK at the same time).

The chance of seeing some rain increases marginally however, as Fuerteventura is a generally dry island the risk is still low. The sea has some residual heat left in it at 22°C, heat and humidity is low and the UV level drops to high - much less severe than in the previous months.

Fuerteventura's weather in October makes it a good place to go for some warm late summer sun, especially if you're hoping to hit the surf and make the most of the trademark winds.

Like all the other Canary Islands, Fuerteventura's weather has helped to make it as popular in winter as it is in summer, and with such reliably warm and sunny conditions, it's hardly surprising.

December sees around six hours of sunshine per day, the annual minimum for the island, rising to seven hours in January and February. For comparison, this is the same as Bournemouth at the height of summer.

Daytime temperatures also tend to sit around the 20°C mark from December, dropping to their lowest in January at 19°C, rising to between 20°C in February and 22°C by April.

As for heat and humidity, there's not a trace of it between November and April, and UV is only high from March onwards.

The trick with the weather in Fuerteventura in winter is to be prepared for the difference between day and night time conditions.

While summer months benefit from long, balmy evenings, especially between July and September, the warmth of the daytimes in winter does not transcend once the sun goes down.

From December to April, evening temperatures dip to between 13°C and 14°C after sunset, so remember to pack an extra layer or two.

As for the sea, most people are likely to find the temperature a little too chilly for swimming in winter. From 21°C in November to 19°C in January and 18°C from February to April, it's most certainly not warm water, so if you want to go for a dip find yourself accommodation with a heated pool.

Those who love water sports and are happy to throw on a wetsuit will have no bother getting out into the ocean.

Living up to its notoriously dry reputation, Fuerteventura is protected, to some extent, from the wildest weather by the neighbouring island of Lanzarote, which sits between it and the oncoming weather.

Consequently, the weather in Fuerteventura remains relatively dry even during winter. While the months of December to February are typically the wettest, the figure is still very low at around 18mm per month - the UK usually sees about three times this amount of rain during the same period.

Several times during the year, but more often in February and March, calima winds blow dust from the Sahara Desert out over the Atlantic Ocean, which can greatly affect Fuerteventura's weather.

When this happens, temperatures usually rise and visibility drops as a red and brown haze descends on the islands. The intensity and duration varies from hours to days, and in exceptional circumstances calima dust can cause problems for those with breathing difficulties.

Fuerteventura comes close to having near perfect weather in every month of the year, much like the other Canary islands. It is great in the summer especially if you enjoy water sports, and in the winter it is one of the sunniest places you can fly to within easy reach of the UK.

Looking for more information about Fuerteventura weather? Head over to the climate page for the island's annual averages, while the five day forecast will tell you what's coming up this week.

You can also see all of the latest great value holidays to Fuerteventura on our dedicated guide to the island.