The UK's national flag carrier, British Airways*, has announced that it will increase flights to both Bermuda and the Cayman Islands from spring 2023.

The airline will commence daily flights to Bermuda*, departing from London Heathrow, from 26 March 2023.

Meanwhile, an additional departure to the Cayman Islands*, which goes via the Bahamas*, will take the airline's total to five flights per week, also departing from London Heathrow from 26 Match 2023.

Tracy Berkeley, Interim Chief Executive at Bermuda Tourism Authority, said: "We want to thank British Airways for their confidence in Bermuda as a destination and providing UK visitors with more flexibility and convenience in getting here."

Ready to book with BA? Check out the latest offers on flights and book your seat today.

British Airways has announced that it will restart its route between London Gatwick* and Las Vegas*, USA.

The route, which was suspended during the height of the pandemic, will operate three times per week on Tuesdays, Fridays and Saturdays, between 26 March 2023 and 28 October 2023.

Flights from London Gatwick to Las Vegas in 2023 can now be booked online at ba.com*.

BA has revealed that it will launch two exciting new routes to Guyana and Aruba from March 2023.

Both flights will depart from London Gatwick* and operate aboard the airline's B777-200 aircraft twice weekly.

The airline is also set to commence a direct route to Port of Spain in Trinidad* from 26 March 2023. While the destination is not new, the flight will go direct instead of, as it currently does, calling at St Lucia.

British Airways has released details of its latest new summer 2022 route from London to the Portuguese archipelago of the Azores*.

The weekly flights from London Heathrow will take passengers to two destinations across the islands: firstly, the capital of Ponta Delgada* on Sao Miguel island (between 2 July and 3 September) and neighbouring Terceira island (between 10 July and 28 August).

BA's Director of Network and Alliances, Neil Chernoff, said: "After a difficult 18 months, it's fantastic to be in a position to launch two new routes next summer from Heathrow.

"These two Islands in the Azores will be the perfect addition to our network, offering more choice in one of the most popular regions in Europe for British sunseekers."

It's been revealed that BA CityFlyer, the subsidiary of British Airways based at London City Airport, has taken a number of former Flybe slots at Southampton Airport.

This will enable the airline to offer holiday routes to much-loved destinations from the south of England between 1 May 2021 and 30 October 2021 on its Embraer 190 aircraft.

From 1 May 2021, BA will operate flights to Faro in the Algarve, Portugal, Florence, in Tuscany, Italy, Malaga, Costa del Sol in southern Spain and Palma on the Balearic Island of Majorca, with Ibiza joining the schedule from the 2 May.

Building on this, from 15 May, you'll be able to reach three destinations in France: Bergerac, Limoges and Nice, then from 16 May the longest route from Southampton to the glorious island of Mykonos in Greece will take to the skies.

In addition to these, BA will run weekly flights to Berlin and Edinburgh.

Looking for deals on BA flights and holidays? Check out the latest online fares and special offers with British Airways. 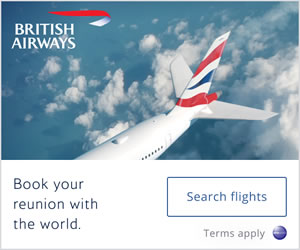