Take a tour of Valletta, Malta's small but mighty capital

The Mediterranean sun shines down on Malta 300 days of the year, the sea is clear and blue, and the hotel pool alluring. With so many affordable all inclusive breaks to Malta with First Choice*, it is easy to relax on that sunbed and laze the days away - and why not? You're on holiday! It would, though, be a crying shame not to take at least one day out to explore Malta's unique and charming little capital, Valletta.

The world's smallest capital city, and a UNESCO World Heritage Site, Valletta was the sixteenth-century citadel of the Knights of Malta. It remains today a honey-coloured gem of narrow limestone streets overhung with colourful painted balconies, and packed with astonishing sights. And it has been in a frenzy of restoration and renovation for the last few years leading up to its role as European Capital of Culture 2018.

Step into the city

Let's start at the beginning - at City Gate. This has been the entrance to Valletta since its construction following the Great Siege of 1565 in which the knights nearly lost these islands to the Ottoman Turks. The knights were determined this should never happen again, and crossing what was once a drawbridge over the defensive ditch, the impressive bastion walls rise and fall on either side.

The gateway itself is a little too sleek to be 450 years old - and far from closing us out it stands permanently open. It is in fact brand new, controversially restructured by the architect of the London Shard, but thankfully nothing historical was destroyed in doing so. The City Gate area was badly bombed in the Second World War and was long in need of this renovation. The redesign has included the construction of Malta's first purpose-built parliament, and a modern open-air theatre inside the Neoclassical ruins of the nation's opera house - once the place to see and be seen.

Performance has returned to this iconic venue and, along with the delightful little baroque Manoel Theatre and many of Valletta's ornate churches, the open-air theatre plays host to regular concerts, gigs, plays, dance, and opera. Valletta may be tiny but its cultural programme is impressive and there is always something going on.

The Manoel is one of the oldest still-functioning theatres in Europe and it was built by the Grand Master of the Knights to provide, "honest entertainment". That was as opposed to the entertainment these supposedly godly, celibate, knights were finding in places like Strait Street. This tiny Valletta alleyway - famous for knightly duels - went on to become the haunt of sailors of the Royal Navy before falling into dereliction. Today, it is rising again as a more salubrious cluster of bars and restaurants and a favourite spot for arts events.

But we are getting ahead of ourselves. From City Gate, turn right up the new steps leading to the top of the fortifications. Passing the solid sides of St James Cavalier (a vast 16th-century gun emplacement) and crossing the recently-pedestrianised square, you will arrive at the arcaded pleasures of the Upper Barrakka Gardens. Perched atop the bastion walls, the gardens offer a breathtaking panorama of the famous Grand Harbour - centre of the Great Siege and the equally crucial hostilities of 1942.

Just outside the gardens is the ornate baroque facade of the Auberge de Castille, guarded by cannon and now the office of the Prime Minister. The knights lived in language groups (langue), each of which had a communal home, an auberge. The more austere-looking auberge of the Italian knights is just around the corner (with a colonial-era British red letter box just outside!). This will open to the public in 2018 as the new national art gallery (MUZA).

Valletta's main street - the spine that runs along the top of the rocky peninsula on which the city stands - is Republic Street. Here, among shops and cafés, are the Archaeological Museum (with unique carvings - including the wonderful Stone Age 'Fat Ladies' - from Malta's extraordinary pre-Stonehenge temples), the Grand Master's Palace on the fountain-strewn main square. At the far end of the square looking out to sea is the beautifully restored Fort St Elmo housing the National War Museum with accessible displays about the Great Siege and the Second World War - there's even the table on which the French surrender was signed handing Malta to the British in 1800.

Before going there, however, you must stop at St John's Co-Cathedral. Built in the military architectural style of 1570s Valletta, the plain exterior gives no clue as to what's inside: step into a dazzling array of gold, marble, and paint covering every inch of the building. The floor is a jigsaw of colourful marble tombs, the ceiling an all-over painting of the life of St John, and the walls a mass of golden curlicues dividing lavish memorials and sacred art. This is undoubtedly one of the great baroque sights of Europe, and one not to miss.

Ready for a break? Find a seat at Caffe Cordina, a Valletta institution with outside seating beneath the columned facade of the National Library (the last construction by the knights in Malta) and the green-galleried side of the Grand Master's Palace. Sit with a coffee, an ice cream or a beer under the benign gaze of Queen Victoria, dressed in Maltese lace and always (well, almost) with a pigeon perched on her head.

Valletta is largely pedestrianised, some of its streets no more than flights of limestone steps. It's a perfect place to wander, peeking into churches and workshops, looking up at people leaning out of their gallarija (enclosed balconies), and soaking up the atmosphere along with the sun. At the end of each street, a little square of blue draws you towards the water that surrounds the city on three sides, so perhaps the perfect way to end the day is with a different perspective on Valletta.

Hop aboard a boat trip

The Two Harbours Boat Tour (with commentary) takes you right round the city in a boat, or hop into a colourful little dghajsa - a traditional wooden Maltese water taxi - for a private half hour circuit of the Grand Harbour. You'll putter in and out of the creeks of the Three Cities (the knights' first base in Malta), past Malta's oldest castle Fort St Angelo (glowing after recent restoration) and beneath the bastion walls of Valletta.

Staring up at the Barrakka Gardens high above, you'll be left in no doubt about why the knights were not besieged again for 200 years. While the Knights of Valletta did an excellent job of keeping its enemies out, today it is does equally wonderful job of welcoming visitors in. Don't miss it.

Make your day trips count when on an all inclusive holiday to Malta with First Choice; head to Valletta for a flavour of the island's past, to soak in the atmosphere, and while away your afternoon on the city's pretty, winding streets. Remember, you can also discover more about the weather in Malta, and see when we think is the best time to go for excellent city-exploring conditions. 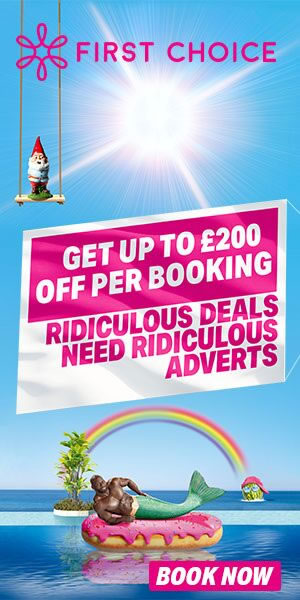