7 of the best resorts on Mexico's Pacific coast

Mexico's westerly Pacific coast may not be as popular with British holidaymakers as its Caribbean coast, but this enormous stretch is filled with tempting, well equipped resorts that enjoy some truly fabulous weather.

If you like the idea of exploring this far flung shore, check out the latest deals on all inclusive escapes to Mexico's Pacific coast with First Choice*. From well known resorts like Acapulco and Puerto Vallarta, to the more obscure Zihuatanejo, our A-to-Z guide to Mexico's west coast shows you the pick of places that need to be on your radar.

The granddaddy of all Mexican resorts, visitors have been coming here since the 1940s, and it later became a playground for Hollywood celebrities. Some of the glitz and bling still remain, and while Cancun attracts young American tourists in particular, Acapulco's appeal is more broad-ranging with Mexican visitors outnumbering international travellers.

Head to Playa Icacos Beach for water sports, the Fort of San Diego for a spot of history, and to Old Acapulco to see the city's famous and fearless cliff divers who have been diving at La Quebrada since 1934. The city's main square, el Zócalo, is a hub for nightlife, street entertainers and good local food in its restaurants.

Guaymas is less than 250 miles from the US border, so receives lots of American visitors. Most stay in the nearby little resort town of San Carlos, on the Gulf of California, to enjoy its beaches and watersports.

In Guaymas itself the tour of the pearl factory, Perlas del Mar de Cortez, is a fascinating insight into a tradition that is dying out in other places along the coast. It's also your chance to purchase a pearl at factory prices.

For families there's the Delfinario Sonora, an aquatic theme park on the road to San Carlos. Here you can swim with dolphins and learn about the marine wildlife you'll find along this stretch of coast, which also has good hiking.

Manzanillo has become one of the busiest resorts in the country, let alone the west coast. It's the number one place in Mexico for deep-sea fishing, while snorkelling, scuba-diving and surfing are all excellent too.

There are two main beaches, each several miles long, and given the excellence of its fishing, fresh seafood is abundant and wonderfully tasty. Manzanillo has a lot more to offer than water-based activities, though.

A few minutes inland from the seafront is the Natura Camp eco-park. Its 173 acres have stimulating hiking trails, and zip-lining. Be warned that it's quite a hike to the first of the five zip-lines, but the views are amazing.

This city in the state of Sinaloa lives today on tourism and fishing: it has the second-largest fishing fleet in Mexico. The two come together in its wonderful fish restaurants, and also the city's aquarium.

The largest in Mexico, it's an impressive place which will teach you about the area's sea creatures. Its 2.5-acre botanic garden also provides welcome shade on a hot day.

Mazatlan has an abundance of beaches, one of the most popular being Olas Altas, which is very close to downtown. The best beaches are on the Isla de la Piedra, which is in fact a peninsula not an island, and easily reached by boat.

Don't miss the Malecón, which runs for four miles along the waterfront, or the grand historic buildings in Old Mazatlan. In the evening head for Plaza Machado with its numerous restaurants and buskers, which manages to be both cheesy and charming.

Alongside tourism there's a flourishing shrimp-fishing industry in the Sea of Cortez, so make sure you have fresh shrimp at least once. Be warned that the shrimp are huge!

You'll find many other seafood dishes on the menus here, so here's your chance to experiment. You can also go out and try to catch your own fish, and ask the restaurant to cook it for you. There are plenty of other water sport activities too.

Puerto Vallarta* is the busiest Pacific Ocean resort in Mexico, with direct flights to numerous Mexican, Canadian and US cities, and to Europe including Gatwick and Manchester. It's popular as a cruise ship port too.

Despite all these visitors, it retains a charming Old Town area, known as the Zona Romantica, although one of the best beaches has a slightly less romantic name: the Beach of the Dead (Playa de Los Muertos).

The town authorities are trying to change it but meeting local resistance. There are numerous other good beaches too, one of the reasons for the resort's popularity.

The Malecon seafront walkway is a delightful place to stroll, adorned as it is with a series of sculptures. Sunday night is when the locals join the parade.

Don't miss the Church of Our Lady of Guadalupe. It only dates back to the start of the 20th century but it's one of the city's most iconic landmarks, topped with what looks like a tiara rather than a tower.

Forty years ago, Zihuatanejo was a quiet little fishing village, but a decision was made to develop it as a tourist resort and now it's the third busiest in Mexico after Cancun and Puerto Vallarta.

Despite this, you still get a sense of those fishing village origins. Except these days you can join in as deep-sea fishing is a popular activity and it's been voted second-best place in the world for sailfishing.

The city sits on a well-protected bay so its many beaches are particularly appealing, with Playa la Ropa being one of the best. Despite its modern origins as a resort, it's very close to the Xihuacan Museum and archeological site which dates back about 3,000 years and is definitely recommended as a day trip. You can also learn more about the area in the archaeological museum in Zihuatanejo itself.

From Puerto Peñasco all the way down to Acapulco, you'll find charming resorts dotted along this lengthy stretch of Pacific coastline. So, for a holiday with a difference - with beautiful beaches and margaritas a given - why not consider Mexico's west coast?

First Choice offers all inclusive breaks to Puerto Vallarta* and the nearby resorts of Nuevo Vallarta* and Punta de Mita*, which depart direct from London Gatwick and Manchester. You can also find out more about the weather in resorts along Mexico's west coast, and see when we think the best time to go. 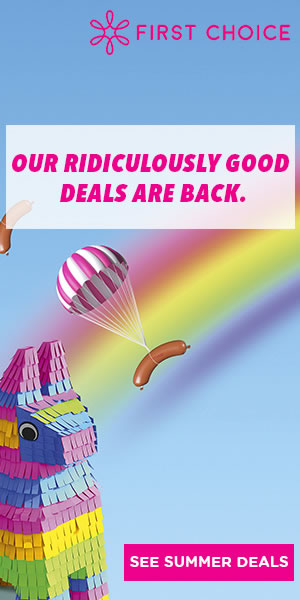