8 of the best islands in the Galapagos

The animals on this archipelago are remarkably unfazed by humans, and many are found nowhere else on earth. Experiences such as swimming with penguins in crystal-clear seas, watching giant tortoises nibble at the undergrowth, and exploring tunnels formed by ancient lava flows will live long in the memory.

Getting to the Galápagos: did you know that holiday giant TUI has created a brand new way for intrepid travellers to escape? If you're interested in finding out more about travels to the Galápagos Islands and other exciting once-in-a-lifetime destinations, check out the latest offers from TUI Tours for 2021/2022.

At the heart of the archipelago, Santa Cruz is the tourist hub of the Galápagos and its biggest town, Puerto Ayora, is just a short journey from the main airport. Beyond its many facilities, the island has plenty to offer travellers.

On the edge of Puerto Ayora, the Charles Darwin Research Station is the perfect place to start a trip. As well as displays on the archipelago's wildlife, history, geology, climate, and conservation challenges, there is a breeding centre for giant tortoises.

Until his death at the - approximate - age of 100 in 2012, the station was the home of Lonesome George, the last surviving tortoise of the Pinta subspecies.

Santa Cruz also boasts some impressive lava tubes, long subterranean tunnels that are, in many cases, large enough to walk through. The Chato Tortoise Reserve, meanwhile, is an excellent place to see some of the Galápagos' most famous inhabitants in their natural habitat.

Located 25 km northwest of Santa Cruz, Santiago is one of the most popular islands to visit in the Galápagos.

On the west coast is Puerto Egas, once the site of a short-lived salt mine, now a fantastic place for snorkelling and to spot flamingoes, marine iguanas, Sally Lightfoot crabs, and fur seals, among many other species.

Sullivan Bay, on the east side of Santiago, is famous for its striking lava formations - keep an eye out for the hardy lava cactus, one of the only forms of life in this stark, largely barren area.

A towering, dagger-shaped volcanic cone, Pinnacle Rock on the island of Bartolomé, just off the coast of Santiago, is among the most photographed sights in the Galápagos.

After putting away their cameras, most people hike up a trail to the 114m summit for views of the island's lunar landscapes. Afterwards, many cool off with a swim in the turquoise waters beneath the rock, often alongside Galápagos penguins.

On the eastern edge of the archipelago, around 95 km from Santa Cruz, San Cristóbal boasts the capital of the Galápagos, Puerto Baquerizo Moreno.

Just outside this sleepy town is the Galápagos National Park Exhibition Centre, which provides a great insight into the archipelago's unique ecosystems and hosts talks and concerts.

Near the centre, a short path leads up to the top of Frigatebird Hill, from where there are expansive views of the island.

Off the west coast of San Cristóbal lies the tiny island of León Dormido (literally "Sleeping Lion", in reference to the supposed shape of the island, but commonly known as Kicker Rock in English).

It is a superb place for birdwatching - the steep cliffs are home to frigatebirds, red-billed tropicbirds, and Nazca and blue-footed boobies - as well as snorkelling and diving.

Straddling the equator, around 80 km west of Santa Cruz, Isabela is the largest island in the Galápagos. It has a small town, Puerto Villamil, and is bisected by a chain of six rugged volcanoes.

A series of visitor sites on the west coast of the island offers wonderful wildlife-spotting opportunities. Pelicans, turtles and sea lions populate Tagus Cove, while penguins, reef sharks and rays can all be found in the mangroves of Elizabeth Bay.

During the rainy season, giant tortoises head down to Urbina Bay, which also boasts numerous land and marine iguanas.

Around 50 km south of Santa Cruz, tranquil Floreana has about a hundred human residents.

Its highlands are a tranquil place to hike, while the coral reefs off the islet of Devil's Crown are ideal for snorkelling or diving. Parrotfish, angelfish, reef sharks, and even hammerheads are among the plentiful marine life.

If you want to send a postcard, head over to Post Office Bay on the north coast of the island. In the late eighteenth and early nineteenth centuries, British whalers would leave letters in a barrel on the beach here to be picked up later by homeward-bound ships.

The original barrel has long gone but the tradition persists: tourists can drop off their own postcards and pick up those left by others to deliver when they return home.

In the southeastern reaches of the archipelago, the island of Española has a pair of fascinating visitor sites. Punta Suárez has colonies of marine iguanas and (between April and December) waved albatrosses, the largest bird in the Galápagos.

Gardner Bay, meanwhile, is one of the most beautiful beaches in the archipelago, a dazzling arc of white sand scattered with colonies of playful sea lions.

Some 95 km northeast of Santa Cruz, Genovesa is among the finest birdwatching sites in the Galápagos.

The island boasts the world's largest colony of red-footed boobies, as well as Darwin's finches, swallow-tailed gulls, mockingbirds and many others.

It is also an exhilarating place to go snorkelling and diving, thanks to the large schools of hammerhead sharks that frequent the surrounding waters.

Weather in the Galápagos Islands, Ecuador

You can find out more about the weather in the Galápagos Islands (the above is taken from the island of San Cristóbal) and see when we think is the very best time to go.

Keen to explore this Ecuadorian archipelago? Check out the latest offers on holidays to the Galápagos Islands with TUI Tours for a great value, expert-led break to this Pacific Ocean wonderland. 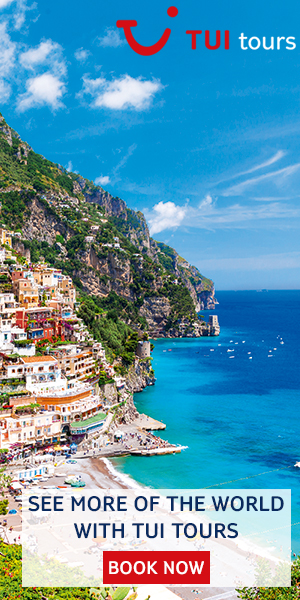