Halkidiki sights: why the Greek mainland is marvellous

Greece is one of the most treasured holiday destinations, yet many flock to its idyllic islands while overlooking its marvellous mainland in error. Here, we share a handful of the ancient, natural and exhilarating attractions that make Halkidiki a must-visit for anyone chasing the sun with a side of culture.

Holidays to Halkidiki: what better way to experience the historical attractions and beautiful beaches than by finding a stylish place to stay from which you can start your explorations? Check out the latest deals on holidays to Halkidiki with First Choice* for some fabulous summertime offers.

The beaches are empty

Halkidiki's pine-scented coastline ribbons for 300 miles via forested cliffs and butterscotch sands. Given such distances, many beaches on the three main peninsulas of Kassandra, Sithonia and Agion Oros are accessible by boat only.

Kavourotripes Beach is like the British Virgin Islands with squid and ouzo picnics. Alykes Beach is a crescent moon of sand backdropped by perfumed scrub. The clincher? A mix of minerality and ocean currents colour the lapping seas blue-green.

Mount Athos is Halkidiki's most isolated - and telegenic - tip. Hilltop monasteries housing golden icons drip like gems into an aquamarine sea. Such serenity has been preserved as only monks are allowed to tread Athos' ancient footpaths.

Mere mortals can tour 'The Garden of Virgin Mary' by boat - as long as they stay 500m or more from shore. Passengers are rewarded by Instagram-worthy views and stops at sandy-trimmed villages like Ouranoupolis*, where Mount Athos wines are on sale.

Get a history lesson at Stagira

The three peninsulas that make up Halkidiki boast more archaeological sites than an Indiana Jones movie. Stagira combines a history lesson with tempting white sands below.

The ruined settlement - now inhabited only by lizards and swaying oaks - had its heydey over 2,000 years ago when local philosopher Aristotle preached above the beach.

Now, ancient stone walls mark the original settlement with its agora marketplace and tumbledown shops. Carry a picnic lunch to the coastal footpath below and dive right in.

Step back in time at Petralona

People have been barbecuing dinner in Halkidiki for a million years. At the ancient caves of Petralona, and its adjoining Anthropological Museum, on show are remnants of the world's first open fire and stone tools - both found on the peninsulas.

Spare a thought for lost shepherd Fillipos Chatzaridis, who stumbled upon the spooky cave in 1959. Now public tours run through the eerie stalactite-spotted cavern. Its uplit interiors also provide a cool respite from the hot Halkidiki sun.

Halkidiki's panoramic seascapes are as alluring as they are dangerous. Glassy seas hide limitless depths, which can be whipped up in winter winds. Persian galleys have been joined by more recent wrecks like 40m-long German cargo ship Mitilini, which sank 20m to the sandy seabed in 1961.

It's now a living aquarium for grouper, anemones and starfish. Other great scuba sites include a 60m-long diving wall near Porto Valitsa guarded by octopus and moray eels.

Stroll the villages of the Kassandra peninsula

The real Greece is only a short drive away. The sleepy settlement of Afytos on the Kassandra peninsula was once a powerful city-state. Where villagers now sell mountain honey, a mint once cranked out gold coins with the image of Zeus on one side. The curvaceous sands below the village are still priceless.

Just as charming is Kriopigi. The old village is a postcard of climbing flowers and tumbling building, with yet another beach down below. Save time for the historic fishing port of Nea Skioni. A forest breeze trickles through timeless churches and waterside cafés, the latter selling thimbles of bitter coffee.

Once-in-a-lifetime wines proliferate on each of the three Halkidiki peninsulas. Fiery red grapes like Limnio can withstand raging sunshine and were once sipped by Aristotle. Others whites like Malagouzia are reared atop sea cliffs, where cooling breezes mature wines with a saline whipcrack.

Wineries like Domaine Porto Carras welcome visitors to sample vintages from the undulating slopes of slopes of Mount Meliton. The best bit? All pair perfectly with Halkidiki dishes like grilled fish, aubergine dip and vine-wrapped dolmades.

Those clever Greeks chopped Halkidiki in two at its narrowest point. The resulting Potidea Canal allows fishing boats to hop between seas, instead of making a 60-mile dash around the Kassandra peninsula.

Seafood is the order of the day at the adjoining town of Nea Potidea. Think cuttlefish couscous, slow-baked octopus and squid with trachanas, a traditional Greek pasta.

The beach bars may play Bob Marley but life was once tough around here. Until a bridge was built over the canal in 1967, every item travelling up the peninsula had to be rafted across.

Laze on Halkidiki's only island

Only 500 lucky residents live on Halkidiki's heartrendingly beautiful island. A handful of Euros grants passage on the regular ferry to Ammouliani, which putters across crystalline shallows.

Bring a swimming costume. Because aside from blossom-scented walks and paddleboard jaunts, the island is all about the beach. A dozen powder-soft curves are dotted with low-key beach bars. These include the lonely sands of islet-strewn Drenia, Blue Flag Porto Agio and boat-only Agios Giorgios.

Part of northern mainland Greece, Halkidiki benefits from slighter fresher conditions than some of its sibling islands to the south and east. That said, as you can see, summer days are very warm and sunny - perfect for exploring its many marvellous sights.

For more information on the weather in Halkidiki, check out our dedicated guide and see when we think is the very best time to go.

Ready to discover the many delights of mainland Greece? Find your dream home-from-home in Halkidiki with First Choice, and set up camp in all inclusive heaven before venturing out to explore the ancient sights, scents and flavours spread across these three peninsulas. 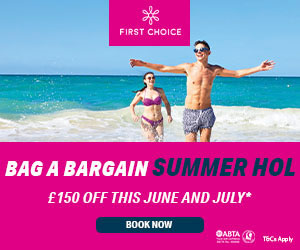 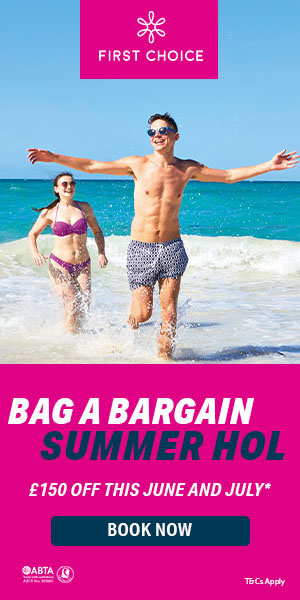