Brilliant-white powder snow, well-groomed pistes and ample sunshine make Canada well worth the trip for winter sports. Whether you're inexperienced, confident on the slopes, into adventurous sports like heliskiing or simply enjoy the famed après ski, you'll find a ski resort in Canada with your name on it.

Getting to Canada: if you're planning a seasonal break on the slopes in this North American's favourite, check out the latest deals on holidays with Crystal Ski*.

The town of Banff in Alberta sits in Canada's oldest national park and is a fantastic, well-equipped base for winter sports. Shuttles run to three nearby resorts.

Dancing to live music at the Rose & Crown and trying the latest craft beers at the Banff Avenue Brewing Company count among the urban après ski options. There's also plenty of options for good food, including the laidback Saltlik and fine-dining Eden restaurants.

The skiing at Sunshine Village*, 15 minutes' drive from Banff, regularly lasts into May - the longest non-glacial season in Canada. Enjoy the deep powder or test your skills in the terrain parks, of which there are four, including one designed for kids.

You could also spend a day or two at Mount Norquay, on slopes that are ideal for beginners and building confidence at the start of a ski break.

The Sunshine Village snow report shows potential for good quality snow† for each week of the ski season based on 15 years of historical observations.

Lake Louise* is also in Banff National Park, and was named among the planet's top three resorts and freestyle destinations at the 2017 World Ski Awards. For a plush stay, check out The Fairmont Chateau Lake Louise, which offers chic accommodation and dining overlooking the frozen body of water that lends the resort its name.

Carving along on the light snow of this resort's 145 trails, including one that stretches five miles in length, gives you opportunities to enjoy the spectacular mountain scenery. Runs for skiers of varying abilities depart from each of the chair lifts, letting you can maximise time spent with friends if you're travelling in a mixed-ability group.

Keen to try something new? Snow-shoeing and snow-tubing count among alternative methods of traversing the snowy terrain.

The Lake Louise snow report shows potential for good quality snow† for each week of the ski season based on 15 years of historical observations.

Big White is an hour's drive east of Kelowna, in the heart of the Okanagan Valley, British Columbia, one of Canada's premier wine-producing regions.

With ski-in, ski-out accommodation and a pedestrianised centre, Big White is a good option for family ski holidays and has plenty of trails suited to intermediate skiers. Fat bikes, dog sled tours and sleigh rides count among the activities that can be experienced if you're not much into your skiing or boarding.

The Big White snow report shows potential for good quality snow† for each week of the ski season based on 15 years of historical observations.

Marble Mountain is a seven-hour drive from St John's, the provincial capital of Newfoundland & Labrador, and is recognised as the best skiing and snowboarding destination in Atlantic Canada. Floodlit skiing, on Friday evenings, is accompanied by live music - it's an opportunity to experience the warmth of Newfoundland's hospitality while out on the slopes.

Pulling on a pair of cross-country skis brings an opportunity to explore trails in nearby Gros Morne National Park. If that sounds too much like hard work, you could always straddle a snowmobile to take a tour in and around the Humber Valley.

Revelstoke, meanwhile, is celebrated for its prodigious dumping of easy-to-ski powder snow and for having the biggest vertical drop of any resort in North America - an impressive 5,620 ft (1,713 m). Once you've ridden all the lifts and explored the North Bowl, you could always head out on a snowcat.

If you're feeling super confident and after something a bit different, why not book a ride in a helicopter for views of the mountaintops before swishing through virgin snow in the backcountry? Selkirk Tangiers, Canadian Mountain Holidays and Eagle Pass offer opportunities to heli-ski and explore beyond the trails skied by the majority of visitors.

The Revelstoke snow report shows potential for good quality snow† for each week of the ski season based on 15 years of historical observations.

For beginners and family ski holidays, Sun Peaks* is a fabulous option. Less than an hour's drive northeast of Kamloops, Sun Peaks offers accommodation in Alpine-style chalets with easy access to the pistes on Sundance Mountain, Mount Morrissey and Tod Mountain. They range from broad, well-groomed slopes with easy, cruisy runs to the Chute, a steep, profoundly challenging trail.

As the second largest ski resort in Canada (after Whistler Blackcomb) there's ample terrain to explore. Three terrain parks provide opportunities to play on jumps and in half-pipes, with the Platter Park staying open into the evening.

The Sun Peaks snow report shows potential for good quality snow† for each week of the ski season based on 15 years of historical observations.

Mont Tremblant* in Quebec's Laurentian Mountains is less than four hours' drive from Quebec City and under two from Montreal. That proximity gives you an opportunity to plan a holiday combining a few days on the slopes with urban sightseeing in cities brimming with cultural attractions.

Ottawa, which hosts the annual Winterlude Festival and turns the Rideau Canal into the world's largest skating rink, is also less than two hours' drive from Tremblant.

Back at the resort, it's divided into north and south sides, meaning pistes blessed with sunshine for much of the day. Whether you prefer relaxing runs you can cruise down or more challenging pistes, you'll find plenty to keep you busy on Mont Tremblant.

The Tremblant snow report shows potential for good quality snow† for each week of the ski season based on 15 years of historical observations.

Planning a ski trip to Canada or elsewhere? Don't miss our detailed snow reports to slopes around the globe.

North America's largest ski resort is a scenic, two-hour drive from Vancouver. That proximity, along with world-class slopes, made this a venue for all of the Alpine events during the XXI Winter Olympic Games.

Whistler Blackcomb* is named after neighbouring mountains linked by a gondola whose cable span measures almost two miles. The resort covers an area of more than 8,000 acres, offering over 200 trails, meaning you won't need to repeat runs to have a good time.

Accessible slopes for beginners plus plenty of options for intermediate and advanced skiers make a week skiing in Canada a dream, whatever your ability.

Après-ski options in Whistler Blackcomb are near-endless: Dusty's Bar and BBQ is a long-established favourite, thanks in part to the vast terrace, while the Whistler Brewing Co. Tap House is a good bet for tasting local craft beer.

The Whistler snow report shows potential for good quality snow† for each week of the ski season based on 15 years of historical observations.

A score of 100 indicates dry snow observed in every year, while values below 75 suggest wet snow or less snow generally. Find out more about snow reports and compare ski resorts.

Dusting off those skis? If Canada sounds like your kind of winter sports destination, check out the latest online offers from Crystal Ski, which has a wide variety of seasonal holidays across the pond for every interest, ability and budget. 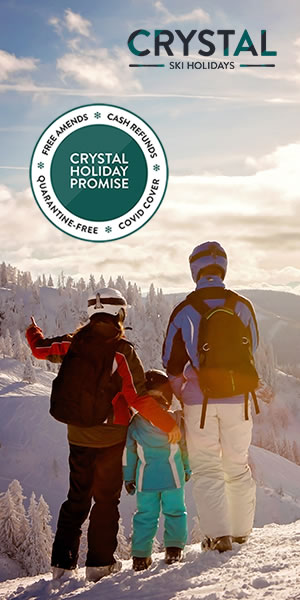